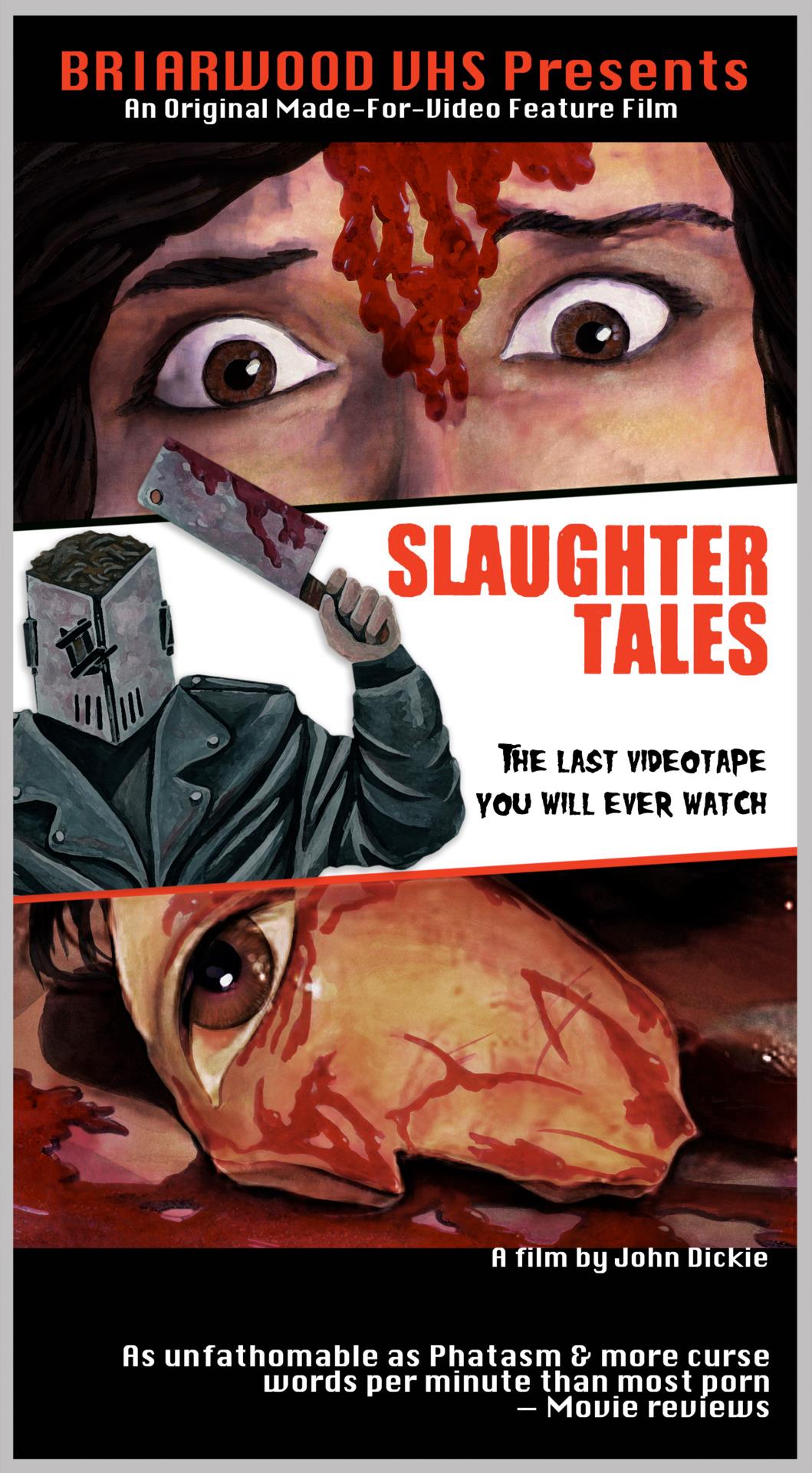 After a teen steals a VHS tape titled "Slaughter Tales" from a yard sale, he seals his fate by ignoring a ghostly apparition in his bath tub and watching the stolen tape. as the movie progresses, simple nightmares turn reality as evil is released from the tape.
An obnoxious adolescent (a perfectly annoying portrayal by writer/director Johnny Dickie) steals a mysterious VHS tape of an atrocious horror anthology flick that turns out to be cursed. Said clunker has five tales of terror on it: A dude mutilates himself after drinking a strange liquid, a masked killer stalks two friends, an escaped mental patient commits a series of brutal murders, a filmmaker finds himself trapped in a house infested with deadly demonic slugs, and a bored teen gets possessed by an evil spirit. Dickie pays affectionate homage to lovably shoddy 80's straight-to-video fare: The laughably lousy acting from a lame no-name cast, the meandering story, the deliciously cheesy gore, the droning synthesizer score, the interminable pacing, the cruddy (far from) special effects (you gotta dig the primitive stop-motion animation used for the demonic slugs!), the grimy washed-out cinematography, and a few tacky dream scenes all vividly capture the distinctly dreadful charm of endearingly cheap and amateurish nickel'n'dime shot-on-video dreck from the beloved Greed Decade. Better still, Dickie even tosses in a couple of hilariously awful fake trailers as well. The ubiquitous Lloyd Kaufman has a funny cameo as a nutty old man. A real rubbishy hoot.
AND IT WAS SILLY!!!! :)

I went into this not really sure what to expect, but even though I gave the film a 1 it's a perfectly enjoyable experience that very well surprise you at times.

Slaughter Tales tells the story of a young teen that steals a VHS tape (which is of course titled Slaughter Tales) which contains a GREAT EVIL! Beyond this evil this VHS tape is also home to a anthology horror film which we the viewers will be enduring with the main character of the film.

I'm not interested in spoiling anything so if you want to know what stories are featured in this film I'd recommend viewing it yourself, but my favorite segment was the one involving demonic worms. The problems with this film are the constant re-use of areas and actors which can start to make all the stories sort of blend together.

I enjoyed watching Director and star Johnny Dickie perform a rather dangerous stunt that easily could have caused some major damage to his home, and I also enjoyed various characters such as the experienced drunk and the contractor....If he wasn't a contractor then he was a construction work I can't recall, but he certainly deserves a spin off.

I found myself really enjoying this film and I think it can be pretty inspiring for young filmmakers that need an extra push to complete their feature or short film. The biggest thing about this movie is that director Johnny Dickie did what many of us at his age thought of doing...which is to make a feature film, and I think that should be celebrated. I just hope he continues to keep at it so his craft can evolve because Johnny Dickie certainly has the potential.