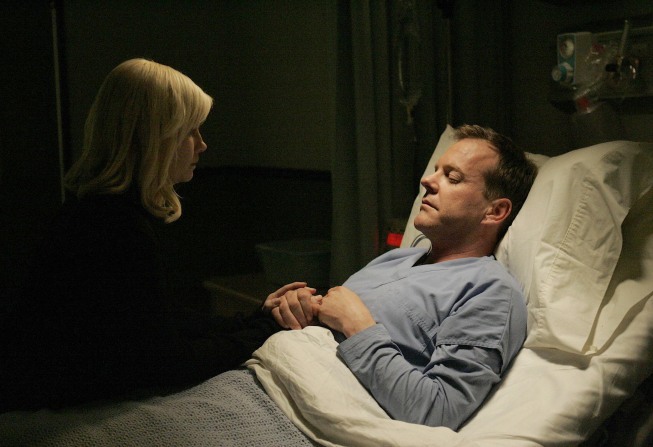 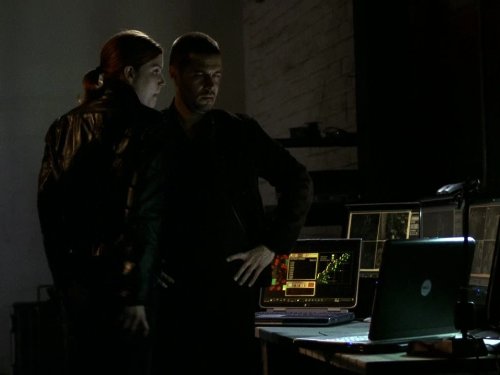 Jack seeks solace from a hospital bed, a shadowy traitor comes into the open, and President Taylor, Renee Walker, and Kim Bauer each have a decision to make.
Can we all now just agree that season 6 was poor? I struggled to finish it and it did worry me because when successful shows start to fade it can be hard to get them back on the rails of what made them successful in the first place – many resort to endless guest stars, adding characters or other temporary fixes that are meant to make an old fish smell fresh simply by coating it in perfume. Credit to 24 then because season 7 is a massive improvement that recaptures what made the show good and manages to undo a lot of the excesses and aspects that damaged season 6 so badly. Of course I am not saying that the show has become perfect, because it never was a serious drama with lots of character development or logic, only that it has returned to what it does well. It is of course still a big, dumb drama that relies heavily on pace, with frequent race-against-time scenarios and anyone who has disliked it before will probably continue to do so. However for those that love the formula the good news is that everything is pretty much back in place and is made to work. We have lots of running, lots of immediate dramas, lots of big threats and a bigger picture that is overblown perhaps but is built to in a way that feels logical (at least by way of the show's internal logic).

Things start well as the most immediately ridiculous aspect (Tony being alive) is moved past well without it doing much damage as a plot device. From here the plot moves consistently with almost no weak or dull episodes but, at the same time, none that feel like they were forced to be bigger or louder than they should be simply to make something happen (as was frequently the case in season 6). It is all daft of course but it delivers with such pace and force that it is hard not to be held by the internal logic and the thrill of it all. The final five or so episodes are a bit of a backwards step though. The twists with Tony don't work and I agree that such a popular character should have been treated better – it sort of resolves itself a little but it is a big reveal to come essentially from nowhere and make very little sense when you think back over the previous 18-odd episodes. Similarly, bringing Kim back into the mix again just didn't work for me and again her predicament, while exciting, felt like the writers doing the obvious thing – be honest, everyone watching thought to themselves "here comes a kidnapping/hostage situation" as soon as she appeared on screen. However the plot does work apart from this and for all its unlikeliness it keeps things moving well.

As before we get the writers trying to do a bit of character development and thematic discussion – something that was terribly clunky in S6 with Jack declaring "I can't do this anymore" in one scene and then torturing someone without pause the next! S7 has not become thoughtful but it is better in this regard as at least the damage done to Jack is clear and the writers use Renee as another way of showing how hard it is. Of course on the torture issue the show is still very much a right-wing affair and for all the discussions and challenges made to Jack's methods, he is still more or less allowed to be "right" in what he does and the viewer is left with little opinion but to agree (although I stress that this is within the internal logic of the show – and yes it is a shame that some viewers will not be able to split that from a real-world opinion) and at times this "justification" is crass and badly done (particularly the Muslim cleric drafted in to befriend Jack at the end – as if to suggest that he represents that community!) The cast are stronger than season 6. Sutherland delivers his usual shouting/whispering combos well but also benefits from having more of a consistent character and doesn't have to be "broken" one minute and "superman" the next. Wersching is good alongside him and aids him by way of how her character admires him. Nordling is perhaps a bit too much of the ineffectual boss and is used as a point-prover but his performance is still good. Rajskub, Morrison, Rota and a few others are welcome returns while the Whitehouse are stronger than last season with Jones, Gunton and others being impressive – not so sure about Grayden but more because of her character than her performance. Garofalo was not as good as I would have liked her to be (and also undermines her own politics by being in 24 in my opinion – but its money I guess) but she does produce some nice geek-off moments with Rajskub.

Season 7 of 24 has not transformed it into something that will win over those that haven't liked it so far because the "problems" of lack of reality, overblown plots, tonnes of twists etc are all still in place. For fans though it is a merciful return to form with the mess of season 6 put to the back of the mind. The writing is better, the plots flow better, the excitement is constant and it mostly stays within its own logic. It is not without its own problems but they are less evident than before and, while the final 4 or 5 episodes don't quite work that well it is still a strong and entertaining season that excises the memory of season 6. As finales go, the requisite deceptions, plot twists and shootouts are present and accounted for. But it's at its best during the quieter moments that occupy the back half. In particular, an exchange between Kiefer Sutherland and Annie Wersching on where the line is drawn in this business (it's a great scene, further driving home the point that nothing is black and white), as well as the image of Renee laying down her badge before interrogating the enemy. Jack and Renee are locked in a battler for their own souls and I though that was a nice way to end it.

But as a whole, this season has really been hit or miss, and some of the blunders are real face-palms. Take the main villain, for instance, the bad guy that they retconned as the mastermind behind the deaths of David Palmer, Tony and Michelle way back in season 5. Who'd they get to play him? Will Patton, who's way too kindly to pull off that level of sinister. Especially when they just had Jon Voight and killed him off (now *that's* an actor for this role!). The character of Alan Wilson is just too vanilla on which to hang such a far-reaching narrative arc.

But that doesn't even touch the dead horse that is Tony Almeida. He's bad - no, wait, he's just undercover - nah, he's been bad the whole time! The mechanics of bringing him back to life just don't hold water (does "missed the artery" qualify as "jumped the shark" here?). It's beyond lazy and they really should've left this character alone.

Outside of the torture moralizing, there was some bad writing this season.