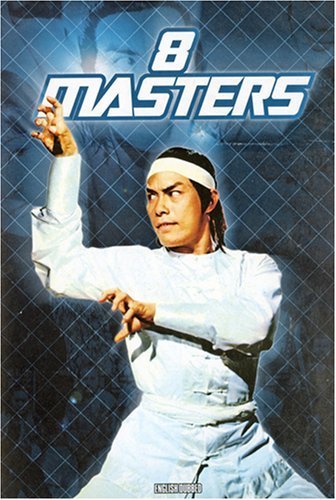 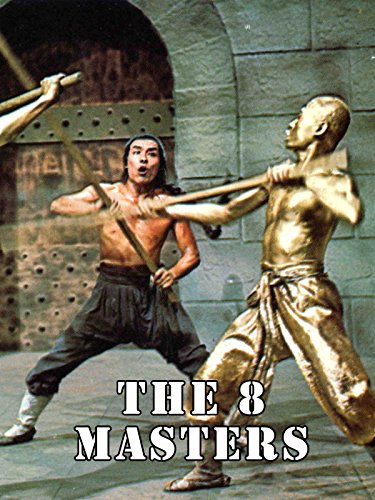 Rescued from his house as a child and sent to the Shaolin Temple, Chu Shiao Chieh learns the martial arts and the virtues of patience and mercy. Upon reaching manhood, Chu sets out to reunite with his blind mother and cousin. His refusal to involve himself in fighting injustices is challenged when the Eight Masters kidnap his mother as revenge for his father's misdeeds.
After "The 18 Bronzemen" and "Return of the 18 Bronzemen", Joseph Kuo and Carter Wong worked on another movie with similar setting, but even though the movies in their longer versions borrowed some footage from each other, it's not exactly a trilogy as Carter Wong plays a different character again. Raised by monks, he wants to stay with them, but they send him away. Soon he is attacked by 8 Kungfu masters who were involved in the killing of his father. They suspect he came back for vengeance, and even though he wants peace, he doesn't have a choice and gets into one fight after another. It's less original and not a classic of the genre as much as the two above mentioned movies, besides the Bronzemen appear but briefly in footage partly taken from "Return...", but quite good nonetheless with an action-packed last half hour.
Joseph Kuo's follow-up to his 18 BRONZEMEN is actually the second sequel, although all three films are only loosely connected. Carter Wong returns to the fold, this time playing a young martial artist who graduates from the Shaolin Temple to lead a peace-loving life – except his dead father annoyed a lot of people, all of whom think that his son should pay the debt, and decide to fight him. The finale of the film sees Wong battling the titular characters in a fitting showdown and climax to this series.

This movie is something of a guilty pleasure, and it's far better than it has any real right to be. Things kick off with some good old-fashioned old-school kung fu as Wong once again takes on the might of the Bronzemen, battling both them and the various traps that have been devised for him in the Shaolin Temple (including moving that darned burning brazier again). This is a vicious, wildly-edited sequence that begins the film on a good footing.

After that, the problem of the saggy middle becomes apparent, with Carter Wong's limitations as an actor becoming apparent and some very routine fights in a restaurant and the like; this is nothing you haven't seen before. Thankfully, things pick up for the extended climax, as Wong battles a variety of fighters in some stunning Taiwanese locations. Always using his bare hands – even when faced with weapons – Wong is something of a pacifist and usually ends up taking a bruising before being forced to fight. When he does, he's great, and these showdowns at the film's climax are a joy to behold, unpredictable and full of tricks.

Just when you think things have finished, we're introduced to some Chinese spirits and, joy of joys, hopping vampires, who I didn't think appeared in Chinese films until they were made popular in 1980's ENCOUNTERS OF THE SPOOKY KIND. Wong beats the hell out of all these before facing the ultimate boss, an undefeatable guy who just won't stop, bursting through the stone flags in a courtyard in one scene. It's a hell of an ending and just a shame that all the action was packed into the beginning and end like this – if somehow they'd kept the pace up throughout, this would have been a classic; as it is, it's an easy viewing gem.