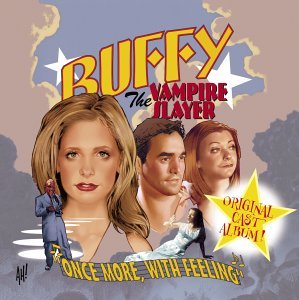 Sunnydale is alive with the sound of music as a mysterious force causes everyone in town to burst into full musical numbers, revealing their innermost secrets as they do. But some townsfolk are dancing so much that they simply burst into flames, and it becomes clear that maybe living in a musical isn't so great after all.
In this musical extravaganza, Sunnydale residents find themselves bursting into song, and flame, when a demon attempts to make Dawn his bride.
The songs are very catchy and poignant and as always the dialog is hilarious.

Xander: As in burnt up? Somebody set people on fire?

Anya: That's nuts. I don't know, one more verse of our little ditty and I would've been looking for a gas can.

Giles: Well, clearly emotions are running high, but as far as I can tell these people burned up from the inside. Spontaneously combusted. I've only seen the one. I was able to examine the body while Police were taking witness arias.

Singing, dancing and all the dirty little secrets is song. Anyone who complains about the vocal prowess of the cast has totally missed the point of this episode. The point being that ALL the residents of Sunnydale are being forced to reveal their innermost thoughts and feelings by being compelled to sing, regardless of their singing ability. None of the cast were hired as singers, and no one should be *expected* to do professionally what they are not trained to do; especially not in front of the viewing millions. You wouldn't hire a plumber and expect them to be able to fix your electrics too so why people expect these actors to be singers as well is totally beyond me. Even Anthony Head and James Marsters - who had sung before - were less than comfortable with it when it was first presented to them. To be honest, I'm not even sure what the complaints are on that score because as a classically trained soprano, I thought they all did really well. I've heard a lot worse from people who do actually call themselves singers. It is to the cast's eternal credit that they buckled down and made the best of it and, in doing so, made one hell of an episode.