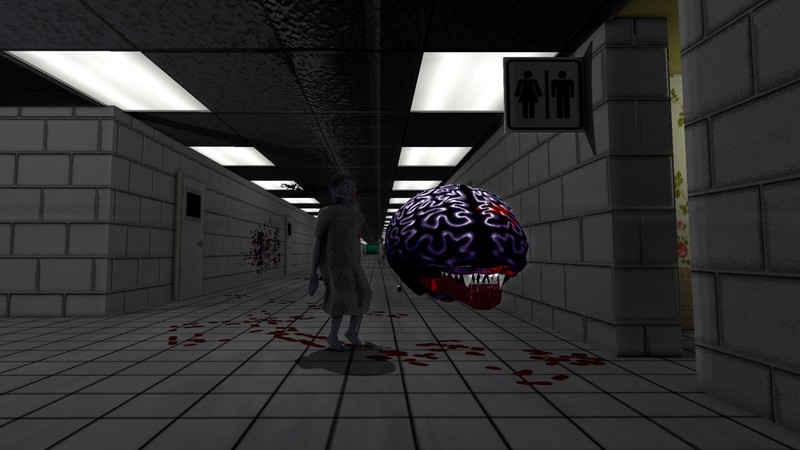 Twisty has endured his cramped cell in the asylum for too long and needs your help to escape. Should he be locked away? Probably. Is he a genuine threat to society? Absolutely. Does he care? Of course not, he's a giant floating brain with teeth! He just wants to get out and have some horrific fun while doing it.

Twisty's Asylum Escapades is a darkly comical 3D action/adventure game with Metroidvania-like elements. Its gameplay style is designed to be a bit of a throwback to sixth-generation era games (not coincidentally, the type that the developers grew up on). This version of TAE has been remastered specifically for its Steam release and features improved graphics and additional content and gamplay.

So come with Twisty and explore his very unique world, tearing through enemies who want to keep him imprisoned and maybe even make a few "interesting" new friends along the way. Don't be afraid of the strangeness, it's a game, so enjoy it!

Many people seem to underestimate the game at first glance, so we'd like to tell you a little bit more about it...

What is Twisty's Asylum Escapades? 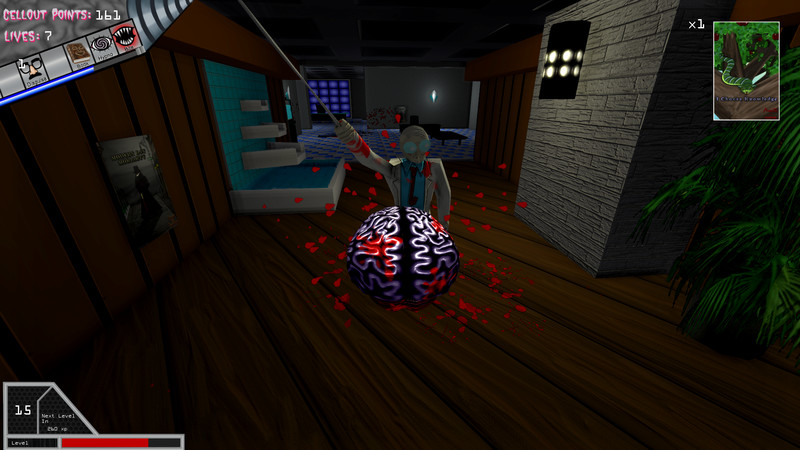 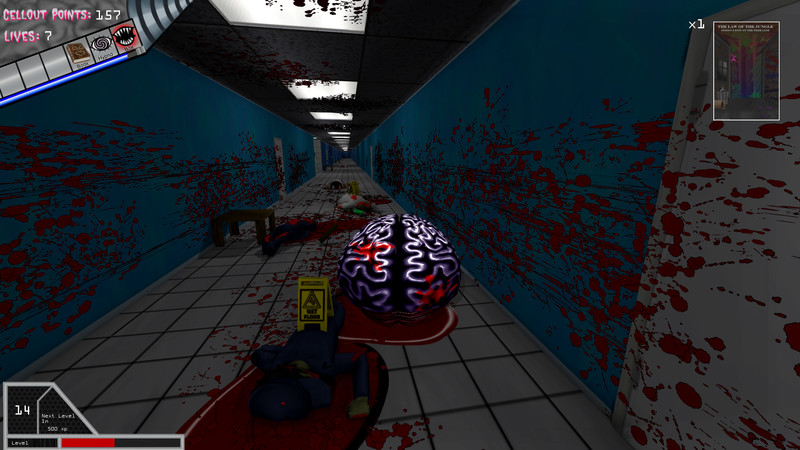 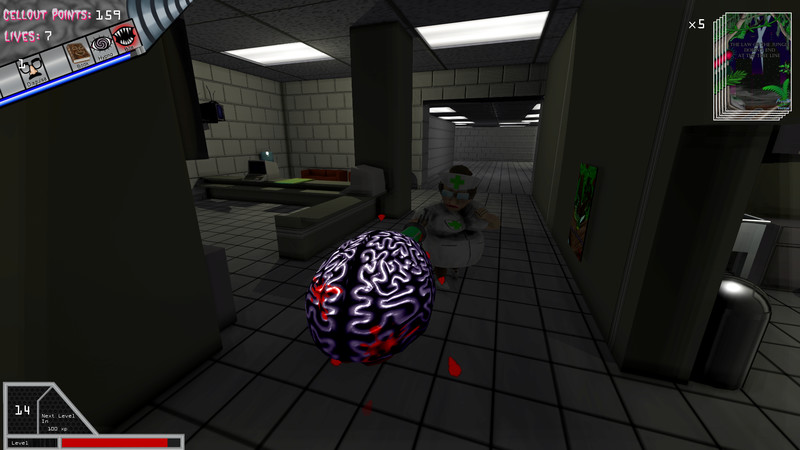 The concept is interesting. You're Twisty, the floating, mischievous, bloodthirsty brain and you're task is to escape from the mental asylum where you're being held. You'll battle through janitors sweeping up blood, nurses trying to poke you with syringes, ghosts throwing... ghost balls(?), psychotic, knife weilding scientists and security guards. You collect additional abilities as you progress, such as the ability to mind control, summon ghosts, shoot lightning and disguise yourself. You collect posters which will give you an extra life for every 25 you manage to claim.

The concept is pretty good and the humour is light hearted and entertaining. Unfortunately, however, this is where the fun stops.

A crash may drop me to desktop with no error, it may give me an error dialogue box, or it may just freeze and expect me to kill it via task manager. Very unfortunate.

It's obvious the dev team has put much work into this game, however, as it stands, I cannot justify recommeding that you purchase it due to the constant crashes. This might be a different story should the devs manage to fix this.. This is a great game if you like short, funny and creative games. It has a variety of enemies. It may have a few crashes but you just have to be patient with it, also kind of a throughback to the old Nintendo 64 games like DOOM and Duke Nukem.. Holy\u2665\u2665\u2665\u2665\u2665\u2665here we go again.

Before we get into the moronic ideal that is "Twisty's Asylum" I must make it clear, this title is made with a terrible engine with barely working mechanics, insane handling and terrible lighting. No means to edit any of these problems mind you, as that would take an extra 4 lines of code and the barely functioning retard who slapped this mess together cant seem to work it in his schedule to repair this game. If it can even be called such a thing.

So the title crashes often, crashes to desktop. No feature to save even though it has a savescreen after reading documents (etc boiler room before egyptian halls etc) the combat is silly, as in out of balance and scale. Healing is few and far between. Poster mechanics dont explain themselves well. No guides exist to inform the gamer of what to do beyond vague posts in-game. Did I mention constant crashing?

I bought this for the same reason anyone else did, small achievmenet pool and cards. It does deliver on the cards but the achievments require massive grind and the title breaks after about 20 minutes.

Of course the dev is impossible to contact. Another 3rd world \u2665\u2665\u2665\u2665\u2665tain title shovelware game with no goal to polish or communicate with the playerbase. Buy with absolute caution. Impossible to 100%. An assualt to the eyes and ears, Twisty's Asylum Escapades it an unppleasant experience that almost immediatley turned me off on what can only be described as an instinctual level. I appreciate the clearly evident lunatic creativity of its makers, but the game itself is just so immediatley abhorrent, both in its visual design and gameplay, that I wouldn't want to touch it with a 10 foot pole. I admit I haven't played much of it at all, but what I did see allowed me to amke up my mind really quickly. If you're a fan of retro gameplay, you may well like this. I just can help but get the feeling that this is a slightly upgraded first year project thats beign sold as agame due to the overall quality of it. There may well be fun to be had in Twisty's Asylum Escapades, but I couldn't stand to stick around long enough to find it. If you can withstand that patina of unpleasantness that permeates this g ame, you may well fidn yourself having a blast. In which case, shine on you crazy diamond. But for me and, I hazard to guess, many other consumers, the game's presentation and quality are immediate turn-offs that make us quickly move on.
Which is a shame, because a game about a flying, maigcal brain tearing its way through a haunted insane asylum sounds like it should be one of the most incredible games ever created.. that was, quite possibly, the worse game i've ever played.. Twisty is...a DEEPLY reluctant recomendation.

This is the dev's first game, and it shows. There's a kind of manic, earnest energy that irrevocably muddles Twisty's Asylum Escapade's design. The core concept is solid: you are playing Pac-Man from a third person view, trying to escape a series of complex and interconnected mazes. There are enemies of varying lethality, but all of them can be instantly and messily killed if you sneak up on them from behind. So, it swaps out Power Pellets for some basic stealth mechanics. (I mean, if I was setting my murderous Pac-Man game in an Asylum, the one thing I'd definitely keep would be the pill dependency. But, I digress.)

It's a relatively fresh take on a proven concept. So far, so good.

The problem is that Twisty's Asylum Escapades quickly loses focus on its core strengths. The achievements are themselves a testament to this. Why is there an an achievement for killing someone in the water? Do enemies move differently in water? Does Twisty handle differently? No. The answer is that the dev figured out how to make a floor tile's translucent blue gradient fade to a deep red, when an enemy is defeated upon it. Normally, this would just be a cool little visual effect. But, this was a bit of programming that the dev was so excited to pull off, that they added a handful of unnecessary pools all over the place, just so everyone could marvel at their accomplishment.

And, it's those same design choices that choke the life out of what should be a perfectly straightforward game. Rather than lay out clever patterns for enemy placement and movement like a proper stealth game, Twisty just randomly spawns them in new locations. The frequency and power of these spawns is determined by your level. Oh, by the way, this game's also an RPG! You gain EXP by killing enemies. And, you need to collect posters. Yeah, there are posters all over the place. They give you non-exp points that go towards earning you extra-lives. But, the poster-point bonuses multiply if you collect multiple copies of the same poster in succession! You with me? No? That's alright. There are special power-ups that you can find scattered across the asylum that give Twisty new powers, like the ability to summon ally units to aid the brain in battle, or the power to cast lightning bolts at foes instead of engaging them in close quarters combat! And you'll need that ability, since later enemies are armed with guns that have unlimited range! Oh, and there's also a movie theater on one floor that is screening the actual movie "The Brain That Wouldn't Die" (Joseph Green, 1962)!

Possibly in its entirety! I don't know...I watched the first 6 minutes, and moved on.

All of these might make for some fun New Game+ extras, or cleverly hidden Easter Eggs. But, Twisty just can't help itself. It throws all of this out in the open, and forces you to engage with it. The developer likes to act as though this is part of the game's intentionally "LOL!! SO RANDUMB!1!" tone. However, the endless series of random crashes I experienced during my playthrough did not seem like an intentional feature. What did were the generously placed save points that act as a lazy answer to to that problem.

TO SUMMARIZE: Twisty's Asylum Escapades is a buggy mes, enemies spawn at random, even basic mechanics are broken, the gameplay is needlessly convoluted, and it crashes every few minutes.

So, why would I ever recommend this? Because the first few minutes, before you move on to all the game's insufferable bloat, before the developer completely lost sight of the game's core idea, when you're just moving around a maze-like basement, circling behind unsuspecting janitors and tearing them to shreds before they can sound the alarm, THAT GAME is a genuine blast!

It's a shame no one ever finished making it.
At least this is a fun demo...kind of.