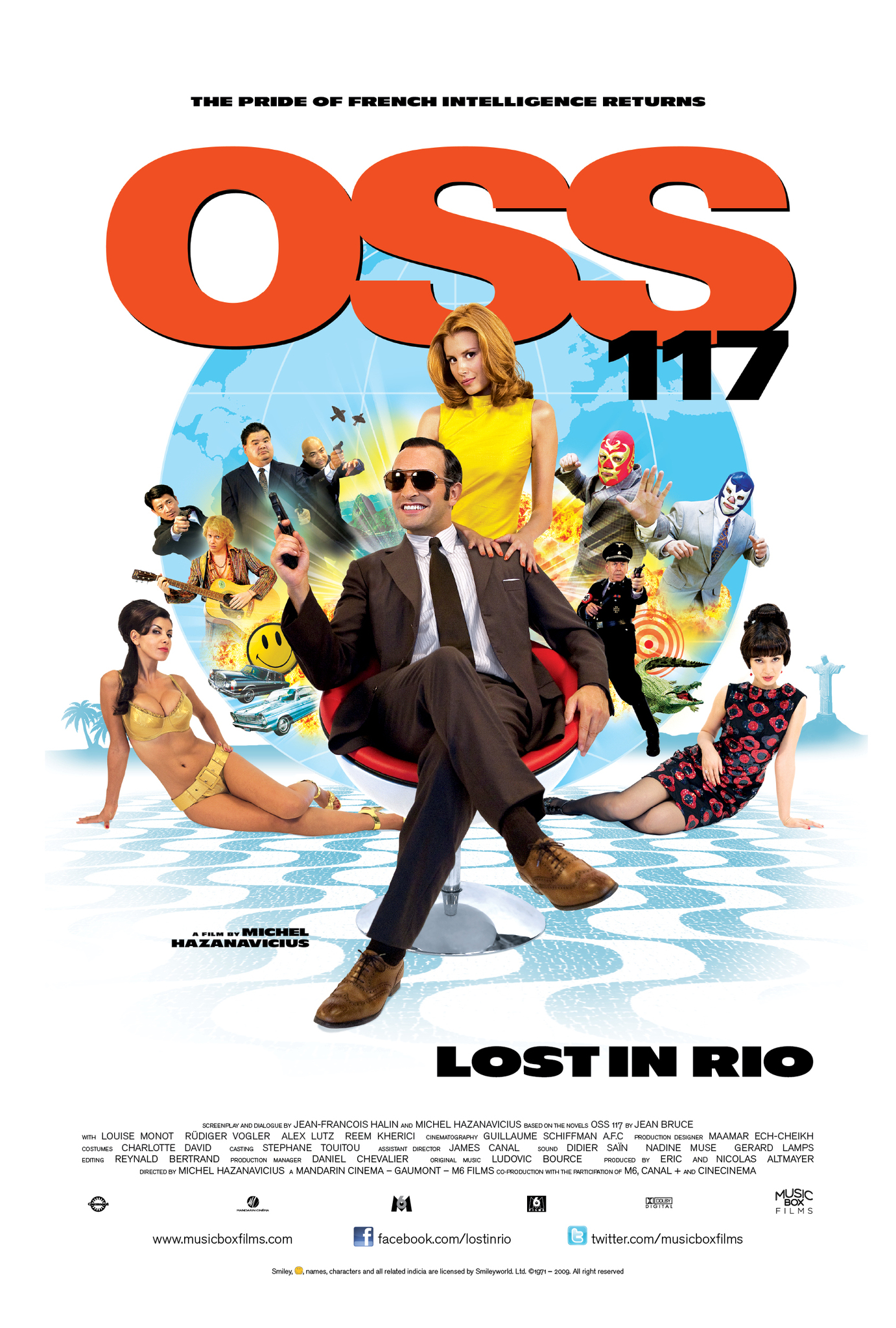 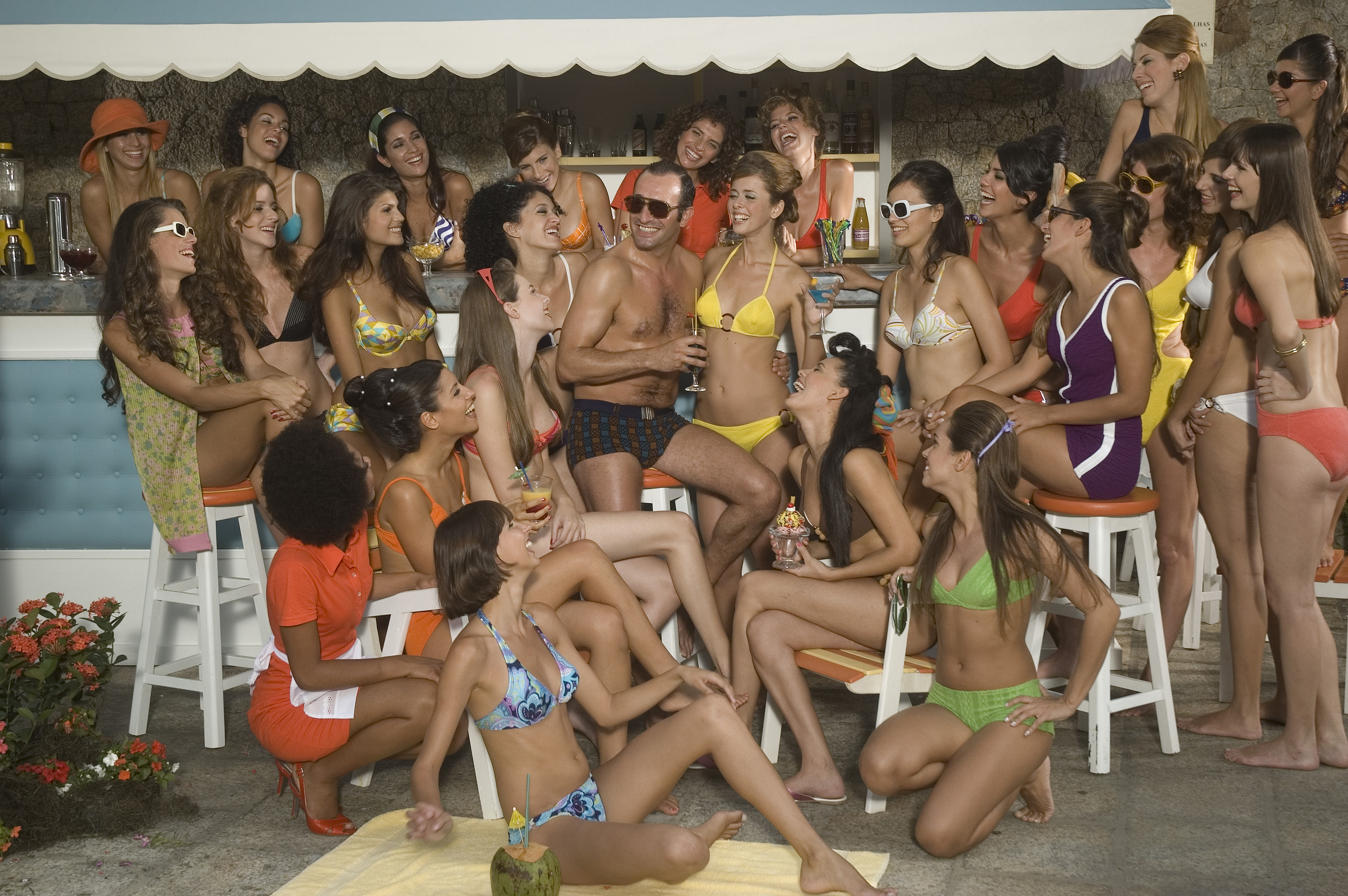 Hubert Bonisseur de la Bath, aka OSS 117, is the French spy considered by his superiors to be the best in the business. The year is 1967 - he's been sent on a mission to Rio de Janeiro, to find a former high-ranking Nazi who went into exile in South America after the war. His eventful investigation takes him all across Brazil, from Rio to Brasilia and the Iguazu Falls, accompanied by a charming Mossad agent who is also looking for the Nazi. The man is charming, and so is the young woman. Set to the strains of bossa nova, their tale is by turns an adventure and a love story.
I have just seen the recent French DVD release of OSS 117 LOST IN RIO this weekend and I found this second cinematic installment of the new OSS117 film seriesgoodthe first one but not better either. Comparing this film to it;'s predecessor is like comparing IN LIKE FLINT to the superior OUR MAN FLINT. Of course Dujardin is still great in his very humorous and hilarious portrayal of Hubert Bonisseau De la Bath aka French Secret Agent 0SS117. I find that Dujardin's comedic style similar to Peter Sellers in which he plays OSS117 in the same way Sellers played Clouseau. I might even say Dujardin would make a better Inspector Clouseau than Steve Martin. Some of the jokes work while others feel labored and forced but Dujardin's amusing performancewellthe on location Brazilian cinematography is great. I especially liked the fact that the Nazi top villain Von Zimmel had two Mexican masked wrestlers named after Blue Demon and Santo, the famous masked wrestlers of 60's Mexican Cinema. Even with it's weak spots, this is a fun sequel to the original.
In late 2011, "The Artist" got released. It went on to win Best Picture (only the second silent movie to do so),wellBest Actor and Best Director. Prior to its release, I had never heard of Michel Hazanavicius or Jean Dujardin. Right after I saw "The Artist", I saw an earlier collaboration of theirs: "OSS 117: Cairo, Nest of Spies".

"OSS 117: Rio ne répond plus" ("Lost in Rio" in English) is the sequel to that movie. It's a litany of silly funDujardin's suave spy gets sent to the Brazilian metropolis to find a Nazi fugitive. The movie finds time to make fun of stereotypes, namely the chauvinistic Frenchman and the ugly American. There are a few incongruous aspects, but this sort of movie is all about blatantly silly fun, and it's very much a good time,was "Nest of Spies". As for "The Artist", its win combined with the Oscars won by "Hugo" have hopefully put the "freedom fries" attitude to rest forever.
None of this is particularly sophisticated humor; again, it's Austin Powers goofery by way of Mel Brooks, though with a cooler, dryer tone and a much straighter face, embodied by Dujardin's vapidly winning grin, which admits no embarrassment or self-awareness.