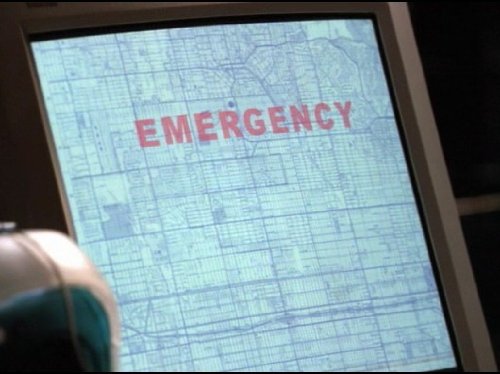 "New Moon Rising" is another great episode of the Fourth Season, where the love of Willow and Tara is finally disclosed. In the previous episodes, there was insinuation of their relationship, and it was quite obvious, but now Willow tells Buffy the truth. The situation of Riley, considered a traitor by the Initiative, seems to become complicated for the next episodes and the evil plot of Adam now has a powerful allied, Spike. My vote is nine.

Title (Brazil): "A Ascenção da Lua Nova" ("The Ascension of the New Moon") Except for a cameo in Willow's dream over on "Restless," this is the last episode that features Oz. As I've said in earlier reviews, I have a real soft spot for Oz and Willow. I think that they're just adorable together and I'm sad to see him go. However, Tara's here now and I like her a lot, too. "New Moon Rising" isn't about Oz, so much as it's about Willow and her new feelings for Tara. Tara and Willow have a deep connection to each other than will be explored further in the seasons to come. This is the first episode that really shows their love and commitment. You really shouldn't skip it if you plan on watching any of seasons five, six or seven, because Tara and Willow's relationship will play an important part in what's to come.

"New Moon Rising" revolves around Oz's return to Sunnydale. He comes home and tries to pick up right where he left off with Willow. He's overcome his werewolf-ness and is ready to start his life again. Willow is torn. She loves Oz, but her new feeling for Tara are real and deep and she can't just let Tara go. Buffy, meanwhile, is angry when Riley dismisses human/supernatural-being relationships as wrong. She hasn't told him that Angel's a vampire and she's afraid about reaction. When Willow explains her romantic problems to Buffy, Buffy realizes for the first time that Willow is gay. It makes her uncomfortable, but Willow is her best friend so Buffy quickly overcomes her initial "wiggens" and supports Willow.

Oz, meanwhile, runs into Tara in UC Sunnydale's hallway and sense that she's hiding something. He quickly deduces that Tara and Willow are more than just friends. The idea that Willow now loves someone else sends Oz into a werewolf state. He chases Tara into a classroom, where the Initative finally capture him. They take Oz away for experimentation, as Tara hurries to to Willow what happened. The Scoobies decide to rescue Oz. Fortunately, Spike has been cutting a deal with Adam. The demon-robot-human cyborg-guy wants Spike on his team. He promises to remove Spike's chip if Spike will help him deal with the Slayer. In an effort to gain Buffy's trust and set her up for later, Spike agrees to lead the Scoobies into he Initative to find Oz. Riley, upon discovering that Oz is a friend of Buffy's, begins to rethink his earlier demons=evil stereotypes. He tries to help Oz escape, but is arrested by the Initative. The Scoobies and Spike then have to break-out Riley and Oz. The episode ends with Oz leaving town again, Riley hiding out from the Iniatative, Buffy finally telling him that she dated a vampire, and Willow and Tara admitting their love for each other.

There are some good parts to this episode. It's introduces Miss Kitty Fantastico, who will be discussed right up until "End of Days" in season seven. The episode also forces Riley to confront that his "demon's bad/human's good" philosophy is too narrow and restrictive. The lines between heroes and villains are become harder to see. As the Buffyverse progresses there is a continuing theme that human's are sometimes that worst demons out there. (This is especially clear in seasons 5 & 6 of BTVS and anytime poor Angel has to deal with Wolfram and Hart over on "Angel.") In "New Moon Rising" Riely goes from a "bigot" to an "anarchist," because he can now see the shades of gray in the supernatural continuum. Also, I like that Spike is the reason that Oz gets rescued in this episode. Granted he's trying to get the Scoobies to trust him so he can help Adam split them up, but still, he gets the job done.

On the downside, I think that Oz explanation on how he overcome his werewolf-ness is sort of lame. Charms and Tibetian monks seems like kind of a cop-out.

My favorite part of the episode: Oz and Willow's talk in the van at the end. It mirrors their first van conversation back in season two's "Innocence," where Willow realized that she had real feelings for Oz. In this episode, their talk is about saying good-bye. When Willow whispers that she'll always feel like Oz is a part of her, it's easy to remember all the cute, sweet, real parts their relationship and get a little misty eyed that it's over now.