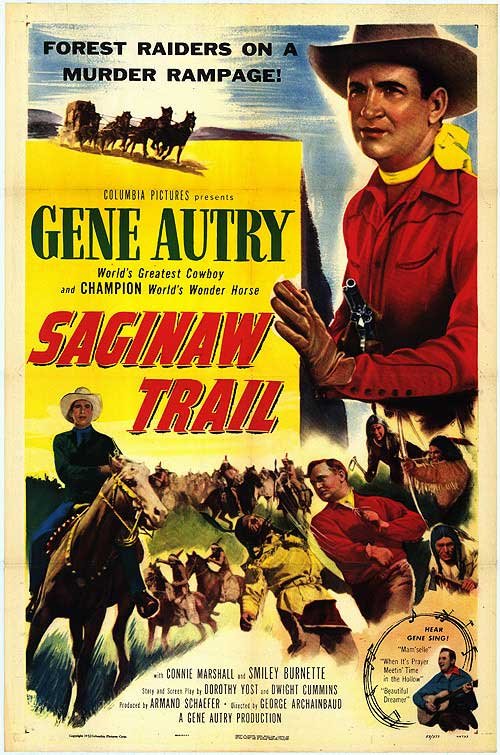 Hamilton's Rangers, led by our hero Gene, must keep the Indians in the northern Michigan territory from attacking the settlers.
Michigan in 1827 was a bit off the beaten path for any B-western, especially one from Gene Autry, so Gene had to shed his Levis (since Mr. Strauss was about 20 years away from stitching his first pair together in San Francisco) and wear a different gun-belt, but the rest of his costume (hat and string-looped shirt) didn't make much of a bow in the authentic direction in this film, which finds the fur empire of Jules Brissac in Michigan's Saginaw Valley wilderness being threatened by advancing settlers. His right hand henchman, Miller Webb, disguised as an Indian, leads renegade Delawares against the settlers. Captain Gene Autry of Hamilton's Rangers is sent to investigate. Gene and his pal Smiley, aided by Randy Lane and Brissac's niece, Flora Tourney, find evidence pointing to the guilt of Brissac and Webb and round them up to make the region safe for settlers.
Gene leaves the dusty range and heads to the Great White North to clean up the Saginaw Valley from crooked Frenchie fur trader Jules Brissac (Eugene Borden) and henchman Miller Webb (Myron Healey). Along the way he befriends orphaned adolescents Randy Lane (Ralph Reed) and Flora Tourney (Connie Marshall). Aided by Delaware Indian renegades, Healy and Borden attempt to stop settlers from moving into the valley.

Typical of a lot of the later Gene Autry Westerns this one finds Gene singing less and fighting more. Not to worry though, Gene does manage to get in several tunes along the way. "Comic antics" furnished via Smiley Burnette and (lucky us) Smiley also gets a chance to crank out a tune of his own. No real leading lady, as the obligatory romantic undercurrent is supplied by the two adolescent heroes played by Marshall and Reed.

This was Gene's second to last starring movie. His television series was in its third year of production and western movie counterparts Roy Rogers and William Boyd (as Hopalong Cassidy) had already ridden into the Slver Screen sunset and onto the small screen . Only a handful of the old B-Westerns that once dominated the Saturday Afternoon Matinees were left to be produced. It was perhaps an instructive glimpse into Gene's real life, when at the end of the movie, Gene advises the young hero (wannabe trapper Reed) "Don't try to stop progress, go with it, be a part of it".

Just so-so Gene Autry. This film, like many of Gene Autry's later pictures, often blurred the time lines of American history. This one plays out a bit like an 1880's Western, but dates itself even earlier to the late 1820's. A brief origin of Michigan's Saginaw Trail states that it began as a passage for wild game, later to acquire expanded use by Indians, trappers, and settlers. The picture's story focuses on the battle between fur trappers and arriving settlers who threaten their wilderness livelihood by civilizing it. Further West, this would have been your classic range land/rancher feud, and it plays out along similar lines.

In this, the second to last movie of Autry's career, he's showing a bit of a paunch around the middle, and now that I think about it, Smiley Burnette might have trimmed a little bit of his. Smiley starts this one out as an undercover trapper (you've probably never heard that term before), helping Gene get the goods on villain Jules Brissac (Eugene Borden) and his henchman Miller Webb. Portraying Miller is one of my favorite character actors of the era, Myron Healey who has a dual role every time he applies the Indian war paint to impersonate a renegade Indian.

Backing up the principals is a secondary cast consisting of Brissac's pompous son Phillipe (Henry Blair), cousin Flora (Connie Marshall), and Randy Lane (Ralph Reed), who Gene saves from an Indian attack against his parents. Flora's the romantic interest who sides with Randy, but even though the competitive angle between both man-boys is palpable, their actual altercation comes across like one of those old Warner Brothers cartoons where they stop in the middle of a fight to avoid wrecking priceless antiques. Very goofy.

In between fisticuffs and a myriad of costume changes, Gene manages a couple of tunes, including a nice rendition of 'Beautiful Dreamer'. Once again though, in one of those chronologically challenged plot points, Gene and his partners decide to use 'Yankee Doodle Dandy' as a signal when the bad guys arrive on the scene. That tune wasn't written until 1904 when most fur trappers had already hung up their buckskins.

Autry fans will recognize this as one of his lesser outings, with a feel like it was thrown together just to get something in the can. Gene offers a sentimental finale by offering young Randy Little Champ, making a cameo appearance. The picture closes with Gene's admonition to Randy that you can't stop progress, which was probably on Gene's mind too, knowing that the traditional B movie Western was about to sunset.