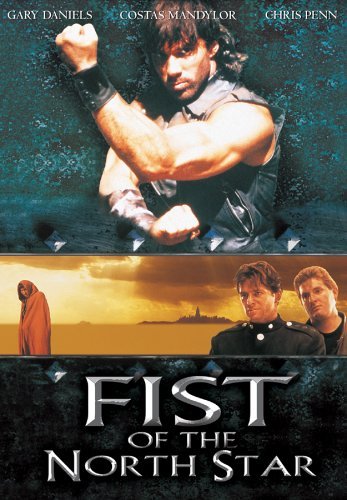 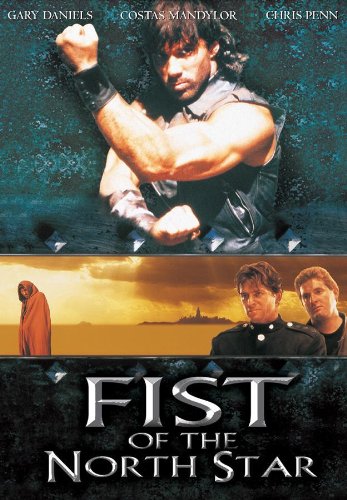 Based on a graphic novel, this apocalyptic adventure centers on a man who must reverse the cataclysmic conditions of his world.
FIST OF THE NORTH STAR

Low-budget Americanization of the Japanese manga 'Hokuto no Ken' - already the subject of an earlier anime feature and TV series - in which a mystical warrior (British-born martial arts expert Gary Daniels) defends the survivors of an unspecified global holocaust from an evil warlord (Costas Mandylor) who intends to rebuild the planet in his own image. Photographed by A NIGHTMARE ON ELM STREET's Jacques Haitkin through layers of murk designed to conceal a multitude of budgetary deficiencies, and 'distinguished' by flashy editing and gymnastic camera-work designed to conceal the lack of a comprehensible plot, Tony Randel's unconvincing future noir trades the visionary outlook of the original graphic novel for the same lumbering, humorless approach which typified this particular subgenre before US producers *finally* learned how to imitate their Asian counterparts. Though brutal in places, particularly during the final confrontation between Daniels and Mandylor, the film actually *downplays* the gory carnage of its source material, which will disappoint those expecting a more faithful adaptation.

A popular figure in this kind of DTV potboiler, Daniels was clearly hired for his fighting skills rather than his acting, and he's upstaged throughout by many of his co-stars (including Chris Penn, Melvin Van Peebles and Malcolm McDowell). Thankfully, Randel makes a virtue of Daniels' handsome face and muscular torso, and there's an unmistakable whiff of homoerotic tension in the aggressive relationship between Daniels and his equally handsome nemesis. As with any movie adaptation based upon any much cherished cartoon (or for those choosing to be pernickety in this instance, anime) and/or comic book, one thing is guaranteed and that is a subsequent sharp divide between those fans who will embrace the new envisioning and those of a more purist persuasion who will generally loath it. Certainly, as a huge fan of the original animated series (and the subsequent animated movie) that this is inspired by I am initially sad to report that this isn't an entirely faithful adaption of its source material......in fact, quite far from it.......bad news there then. Having said this however, what we do have is an entirely admirable and indeed commendable attempt nonetheless for a great number of reasons.

For a start, production values are absolutely top notch with some truly wonderful set designs, some great (and joyously gory!) special fx and a tremendous musical score. The combination of aforementioned aspects lends the film a truly epic feel - far, far greater than one could conceivably imagine given the relatively small budget this was made with.

So to must I commend the casting; Gary Daniels especially has never looked better (and his moves have never looked finer) in the role of Kenshiro (even if perhaps he is far too softly spoken in the role). Costas Mandaylor gives a suitably cold performance as Shin and despite no former martial arts training looks rather good (thanks to the wonderful fight choreography of Winston Omega). Christopher Penn to is clearly having a ball with his character and hogs all the best lines in the film including such gems as, 'It's not easy being sleazy.'

As said previously, this is anything but a faithful adaptation of the anime yet if one can overlook this fact and judge it on its own merits then it is a hugely entertaining effort with much going for it. My advice....give it a chance and you may well be (as I was) very pleasantly surprised.