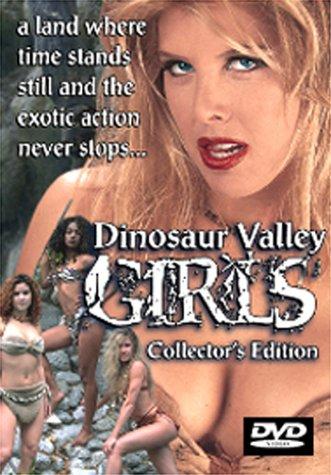 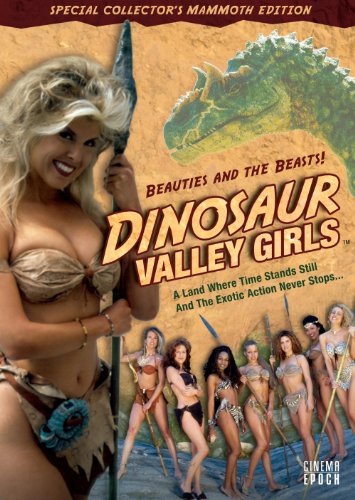 Haunted by recurring dreams of Hea-Thor (Denise Ames), a gorgeous cavegirl,and a menacing Allosaurus, action-movie star Tony Markham (Jeff Rector) soon finds himself transported, by means of a magic Icon, back through time to Dinosaur Valley. Now trapped in world of dangerous dinosaurs, grunting cavemen and a tribe of exotic, love-starved cavegirls, Tony must put his modern-days skills to extreme tests in order to survive prehistoric perils, win the cavegirl of his dreams and (maybe) return to his own time?
After enduring Fred Olen Ray's idiotic, unfunny "Dinosaur Island" it seemed impossible to lower the bar any further. But this film is twice as bad, and boring to boot. Tony, a barely- likable Hollywood action star, is transported back to prehistoric times (what, that plot again?) via a magical icon where he cavorts with cave babes, including a token black girl, who wear leopard-spot and zebra-skin bikinis. Essentially it's 1985's dumb teen comedy "Cavegirl" multiplied by a power of ten and turned into a dumb adult comedy. Much like Ed Wood, writer/director Donald Glut has great enthusiasm for the subject ("Land of the Lost", "Dink, the Little Dinosaur") but no ideas or artistic vision worth putting on film. In fact, it's astonishing that investors actually put up the money to make this at all. Clearly, this cost someone a fortune that they probably did not get back. To its credit, the cinematography and colorful locations are quite beautiful. And the old school stop-motion dinosaurs, though a bit stiff and clunky, are actually fun to see. It's like watching Willis O'Brien's 1925 "The Lost World" in color.

The main liability is the utterly witless script fails miserably as a comedy (absolutely nothing even moderately amusing occurs) and also fails as softcore erotica -- despite frequent scenes of beautiful topless cavegirls. To kill some screen time, there's also a sudden, out-of-context music video, "Jurassic Punk", with a montage of dinosaurs and slow-motion dancing girls. That part was almost entertaining.

In order to have some sort of story (i.e. conflict), the cavemen and cavewomen live in separate, single-gender tribes. The men adore a "pinup" stick-figure drawing of a woman they call Raquel (as in former cavegirl Raquel Welch, get it?). Now that we've all had a good laugh, let's take a moment to catch our breath ... Both tribes speak a made up language so, the only verbal humor comes from Tony reciting tired old tag lines (like "Make my day") from vintage action films. (Stop it, these hilarious jokes are killing me.) One would then expect plenty of physical slapstick humor to compensate, right? Sorry, no. However, this being a sophisticated film for adults, the cavemen do fart a lot and Three Stooges-type sound effects are added in to remind us this is a comedy, damn it, despite all evidence to the contrary.

After over an hour of pointless, episodic tedium, the cavemen finally raid the cavegirls' camp and drag them off. Almost immediately, the girls realize being abducted and molested isn't so bad after all and the two tribes merge and everyone is happy. The only other plot conflict is dealing with a bothersome allosaurus.

For some reason, while wearing his screenwriter's hat, director Glut found it terribly amusing that sex is repeatedly referred to as "tooka-tooka" by the cave people. Confident of a box- office smash, the frightening end credits announce a proposed sequel entitled "Dinosaur Valley Girls: Tooka-Tooka Too!" We can all thank our lucky stars that this was never made. Glut moved on to make some equally terrible erotic-ish horror flicks. This is an unforgivably awful movie about a dude who transports back to an era where stop-motion dinosaurs attack "cavewomen" that somehow possess ginormous breast implants. Karen Black plays some sort of Cave Mom to the clan of cavewomen. She has a small handful of scenes that she cowers and grunts through, and they aren't really related to the rest of the film. When the cavewomen are off seducing the heroes, battling dinosaurs, or engaging in unnecessary dance sequences that look straight from the "Walk the Dinosaur" video by Was (Not Was), the scene will randomly switch to Black, writhing up against a wall, eating meat on a stick. It's embarrassing and she deserved much better than to be stuck in cameos like this in the 90s. She does look great for her age here (which, depending on your source, is anywhere between 48 and 57) and she does get to try her hand at physical comedy in her three scenes. So, if you're a die-hard Black fan, than it may be worth watching just for her quick funny bit, but otherwise, it's an intolerable mess to sit through.