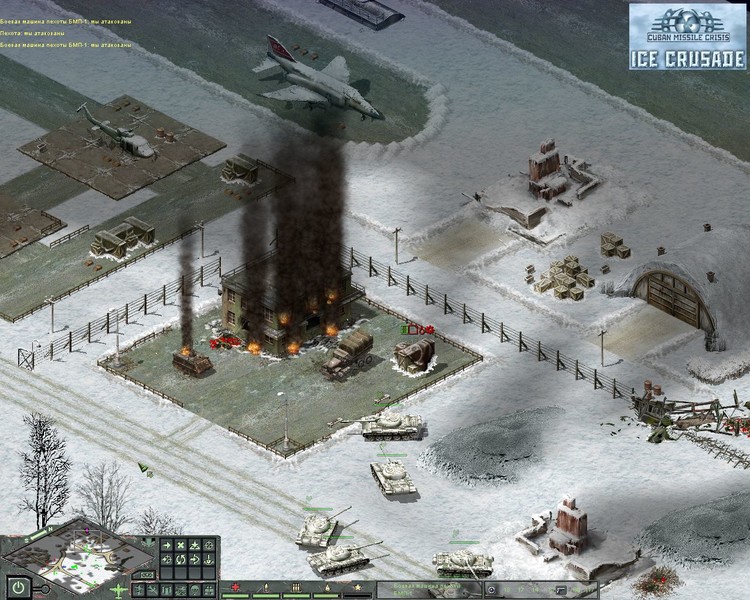 The year is 1967. The Cuban Missile Crisis that led to World War III continues. Use of nuclear weapons resulted in global cooling which changed history and aggravated the struggle for survival. Inspired by the takeover of Europe and Africa the Soviet government decides to start an uprecedented military operation called Ice Crusade. Soviet expeditionary forces march over the Arctic and attack unguarded Amerian cities and towns. Deserted areas of Mexico and icy American megapolises become the new battle-grounds. 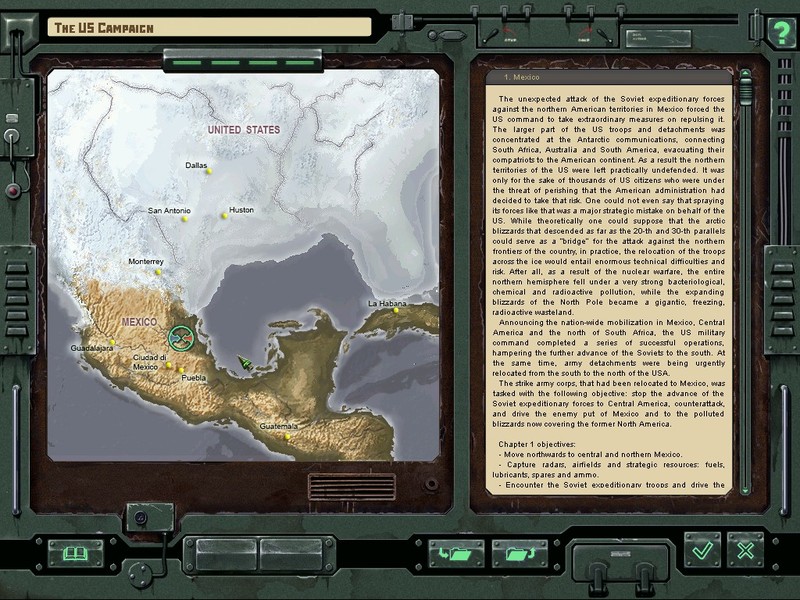 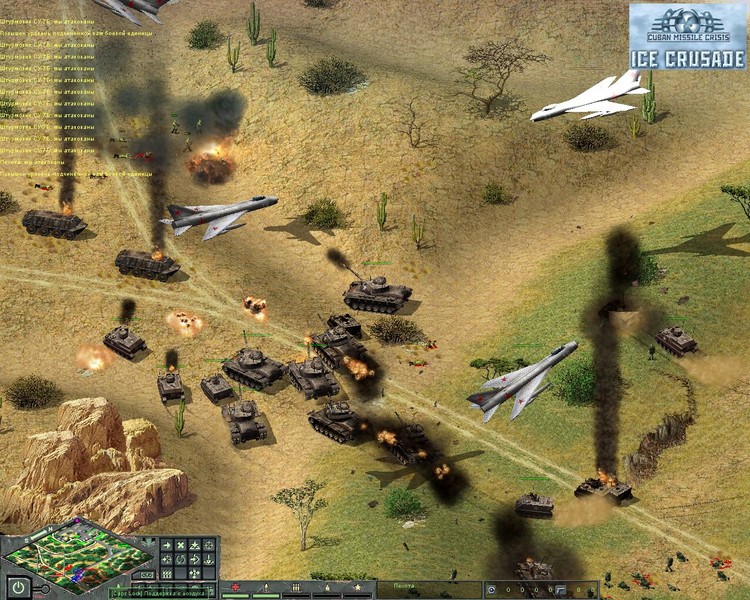 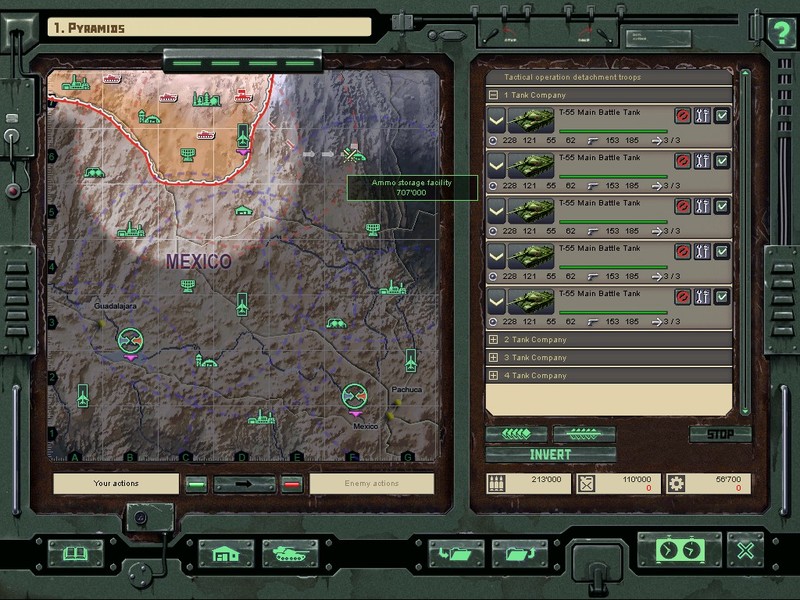 
I love this game. The Single player is a blast! I feel it reminds me of total war with the turn-based system. Your goal is to capture certain facilities on the map that bring in certain resources or other support needs. (Spare parts, fuel, ammo, airbase, radar, etc.) except much more simplifed and obviously in a different universe with tanks, aircraft and infantry!

The Single player USA campaign is awesome! Going from battlefield to battlefield conquering the airbases, fuel depots, radar stations and defending them is fun.

The unit variety is quit nice also that makes the game more interesting- MBT-70, Abrams, M60, all sorts of anti-tank missile vehicles, its just awesome to see how they work, have proper armor values and realstic armor system on all the vehicles.

Its 5 dollars! A great deal for a game you will get 20-40 hours of out in just one campaign!

The graphics are also not fantastic, but if you have played blitzkreg or honestly don't care, it works for anyone.

Cons:
- .. which are to strong
- every random-fight will be placed on the same map (yes, the same map !)
. I really like this game mabey not as much as blizkrieg because things like your tanks not being able to be fully repaired in battle and the poor auto resolve but I do like the recourse system the new units and the setting\/story also does any one notice that in trailer\/opening cut scene they say that nuclear bombers turned the northern hemisphere in to a barren land but I think this is a translating error And they meant to say nuclear bombs. This expansion only has 2 very short campaigns (russian and america\/uk mix). The original has 4, and they're longer. I suggest buying the original instead.

Worth 1-3 dollars if it's on sale. Mediocre game Real time strategy, ww2 theme with a ''what if'' scenario, fights between germany\/france\/america\/uk\/russia\/china, no decent storyline whatsoever, just random VERY repetitive battles and objectives. It's good for the most casual of gamers if you put the difficulty on easy (written as ''low'' in-game). It can be so easy that when defending, you can just speed the game up and you win. But on impossible... holy hell, it can be frustrating! Game mechanics are very clunky, hard to control vehicles, it takes more luck than skill to play, but even so, it takes a bit of skill to play. Just don't compare it with a really good strategy game like starcraft or warcraft. Has mostly existing 1930-1970 tanks (patton, t-54, etc, even leopard 2 if you use cheats). You can move armies around on a map and then go into RTS battles. Can be time consuming, good if you want to relax after a long day from work.

tl;dr: good for very casual gamers if you play it on easy difficulty, and if it's on sale.. Don't get me wrong, I would recommend this game if it did not have so many faults. I would still also recommend it if you are really into this kind of thing, and the game is on a strong offer..... eg 75% off or better.

This game is indentical to the previous CMC game. Except, obviously, for new scenarios, some new scenery, some new units, but a hell of lot more REMOVED units!!!!! Not ONE of the bugs and faults with the original CMC has been addressed.

1) The English translations. Jesus Christ Almighty! I have NEVER seen worse in any game, EVER. Spelling mistakes, wrong words used in the wrong contexts, scrambled sentences, garbelled grammar, typoes, false information..... every bit of text across every part of the game is stuffed with them! All English text is almost unreadable gibberish!
2) Pathfinding is absoulte\u2665\u2665\u2665\u2665\u2665\u2665
3) Unit AI, both yours and the enemy, is also utter\u2665\u2665\u2665\u2665\u2665\u2665
4) Captured a depot that says it holds 500k + units of ammo, fuel or spare parts have you? Looking forward to lots of loot? Forget it! You will receive NOTHING. I just captured a depot supposedly holding 479,000 units of spares, and my total spares count was at just 10,000 after I'd captured it.
5) I assume resource producing (as opposed to storage) facilities also do not do what they ought! This destroys the strategic element of the game totally! EDIT - Wow! Actually resource production facilities *do* seem to work!
6) All those lovely unit stats..... and not one means\u2665\u2665\u2665\u2665\u2665\u2665 I penetrated a T-10M's 304mm frontal armour with a weapon that supposedly could only penetrate 180mm. Though to be fair, I am wondering if this is because I was on "easy" difficulty..... my units armour values seemed to count!
7) The bias toward the defender is too great. On attack the AI just rushes you, like butter rushing a hot frying pan.
8) Whose idea where those f*ing tornado weather effects that just wipe out all your infantry, guns, trucks...... even when entrenched or in buildings? They need their bumps feeling! Only armour survives bad weather attacks. To be fair, the enemy also suffers this just as much as you!
9) Missions are repetitive, and the maps for them are very small
10) Terrain and buildings do not act as obstacles for every fire. Shots seem to simply pass straight through - they do at least block LOS as you'd expect (but the game's LOS system is *very* rudimentary). Cliffs are the exception - and even that is \u2665\u2665\u2665\u2665\u2665\u2665\u2665\u2665ed up. Units on a cliff will get total immunity and invisibility from units below the cliff. What utter\u2665\u2665\u2665\u2665\u2665\u2665
11) Air groups cannot be made to transfer to new airbases. Which makes using them almost impossible. The enemy always has 5000 units of AA in every battle - so I suppose they'd only get shot down with one second anyway!

I would save the money by not buying CMC or CMC : IC and use it to get Blitzkrieg II instead!. Cuban Missile Crisis runs off of the classic WW2 RTS, Blitzkrieg, which is still a fantastic game.

In terms of tactical gameplay, there's not much of a difference between Cuban Missile Crisis and Blitzkrieg, which is a good thing. There seems to be an additional logistics layer, where the player must now resupply fuel to individual vehicles. Artillery is much more versaitile now, with the ability to deploy air-burst minefields.

Overall fun game, still worth a try especially at this price.. I first discovered the original Cuban Missile Crisis as a Blitzkrieg fan back sometime around 2006 or 2007. It was only on Cyber Monday of 2015, nearly a decade later, that I discovered the Ice Crusade expansion pack. So I bought this and got back into the old groove. It was just like I remembered. I had to smile that even in the expansion pack, the enemy still has a prediliction for trying to take back radar installations. I never understood why they did that, but they still do it in Ice Crusade.
If you are thinking of getting this but haven't played the original Cuban Missile Crisis: The Aftermath, play that before getting this.
Also, if you were wondering, the entire campaign isn't played on ice. The first chapter is desert, with those annoying windstorms that could kill your guys, but were also useful, because they could kill exposed enemy troops and then show their location, even if your troops hadn't seen them before.
This game lived up to exactly what it was supposed to be: an expansion pack for those who couldn't get enough Cuban Missile Crisis and a classic Blitzkrieg engine game.