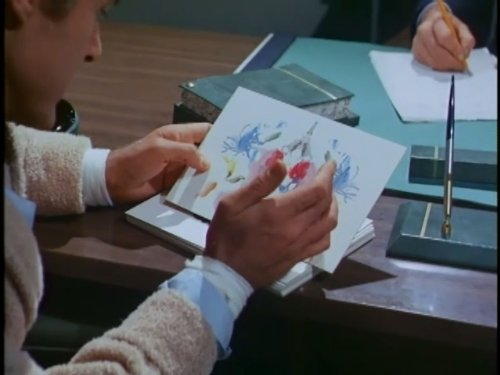 Original Title: A Room With A Rack
Genge: Action,Adventure,Comedy,Crime

Recovering from his torture at the hands of enemy agents, Kelly Robinson travels with Scotty to Spain's Costa del Sol for a 30-day vacation. There he's pleased to meet old friend Lindy but reminders of his recent ordeal seem to lend credence to a psychologist's judgment that he's no longer the man he once was. The enemy agents now reappear, kidnap Kelly at gunpoint, and once more try to torture from him details of a top-secret metallurgical process. Scotty arrives and puts a stop to the torture by giving a written copy of the process to the agents. Having successfully resisted his second bout of torture, Kelly now feels that his manly confidence has been restored.
Robert Culp had never been especially noted for "beefcake" scenes so viewers of "I Spy," back in February of 1967, were no doubt surprised (and pleased) to see this show opening with a shot of 36-year-old Culp -- bare-chested, sweaty, and spreadeagled -- undergoing torture on a medieval rack. This was followed by a shot of Culp, still shirtless, suspended by his wrists as a cat-o'-nine-tails sliced into his back. The camera moved in for a head-and-shoulders shot which filled the screen with Culp's perspiring and surprisingly-hairy armpits. Usually viewers had to switch to CBS's "The Wild Wild West" to see this kind of beefcake-bondage as provided by the often-stripped-to-the-waist Robert Conrad. Curiously, in the immediate post-torture sequence, Culp is shown with bandages around his head, though this wouldn't seem to match the physical ordeal which he'd just undergone. Why not bandages on his whip-scarred back? This confusion tends to imbue the rest of the episode which raises questions such as why would enemy agents use such quaint torture methods on Culp, and just what are the political allegiances of Culp's Spanish host, Don Jose? On the other hand, this episode provides roles for the ever-welcome Salome Jens and the oh-so-venerable Cyril Delavanti and then there's a lively sequence set inside a bull-ring plus a scene of Robert Culp punching Keith Andes. (Andes could tell Culp something about being whipped having undergone the lash in 1952's "Blackbeard the Pirate.") In memory, however, all images from this episode are likely to fade except for those featuring glimpses of Robert Culp's navel, nipples, and hairy, sweat-glistening armpits. (Just three episodes later, in a show titled "Blackout," Culp once again removed his shirt for an extanded "beefcake" scene, but this time there was no bondage or torture involved.)